The Art Of Resistance: The Exquisite Uterus

We just couldn’t take it anymore!  Artist and educator Alison Gates and I had come together to discuss an art exhibition of emerging artists we are curating in conjunction with the regional Wisconsin Women’s Studies and LGBTQ Conference .  The conference if being planned for October 5-6, 2012 at the University of Wisconsin-Oshkosh  in Oshkosh, Wisconsin. Our meeting happened to be during the time when the “War on Women” was becoming more and more visible.   Virginia legislators had moved forward a new law requiring women have an unnecessary trans-vaginal ultrasound before having an abortion.  This followed high profile attempts the same week to exempt religious organizations from  being required to offer health insurance that covers contraception; Rush Limbaugh had recently verbally assaulted all women who use contraceptives through his attacks on Georgetown University law student Sandra Fluke; Planned Parenthood Programs’ basic health programs for poor women were being de-funded; GOP legislators have were seeking to exempt religious organizations  from having to offer health insurance that covers contraceptives; in Arizona and Kansas Republican state legislators  were pushing bills allowing  doctors to lie about the health status of a fetus to pregnant women so they couldn’t opt for abortion; women where I live in Wisconsin  were seeing legislation passed that infringes on the physician-patient relationship  and there were legislators blocking the Violence Against Women Act because they didn’t want Native American Women,  or gay and lesbian victims included, nor protective measures for undocumented women.  It was just too much!  (More has happened since.  The Violence against Women Act was passed relatively intact in the Senate but the House of Representatives continues to support a bill that excludes women on reservations, ignores same-sex violence, and demands women who are undocumented choose between being reported or getting help.)

After some very satisfying venting over coffee we gave into our natural tendencies to turn to art as a means of addressing the issues we were concerned with.  Our collaborative feminist art project was born.  We have dubbed it “The Exquisite Uterus: The Art of Resistance”  and we invite you to participate along with anyone else who wants to join us in demanding that our reproductive health should be our own concern.  We offer you a uterus to do what ever the heck you want to do with it.

The art history buffs among you may recognize a reference to a Surrealist technique called the ‘exquisite corpse’ (cadavre exquis).  It is among Surrealist techniques that celebrate the mystique of accident through a collective collage of words or images.  Based on an old parlor game, it was played by several people, each of whom would write a phrase on a sheet of paper, fold the paper to conceal part of it, and pass it on to the next player for their contribution.  We invite you to participate in our collective and collaborative Exquisite Uterus suspecting that each piece will be wonderful, but the whole will be greater than the sum of its parts, and will help to create a synergy that uses our outrage for a greater good.

Interested artists and other motivated participants are asked to embellish a plain cloth uterus “blank” (a square of organic white cotton canvas fabric with a simple black and gray medical illustration of a female reproductive system printed permanently on its surface.) Final works should be approximately 13″ square.   Participation is free except for the cost of purchasing the organic cotton canvas uterus and mailing. The fabric uteri are available via on-line orders here: http://www.spoonflower.com/fabric/1080580  (It will cost $14.00 for a ‘fat quarter’ that included two uteri. You can give one to a friend). All proceeds to the designing artist  (me) from the sale of this fabric will be donated to organizations working for women’s reproductive justice.

Participants are invited to manipulate the blank uterus in any way their fertile imaginations desire, making their prodigious powers of self-expression and creativity obvious to all. (Whether or not you still have an original uterus, this project offers an opportunity to use your originality to creatively fashion a new one.)  Let us know by July first you are participating and send us your finished Exquisite Uterus by July 1, 2012.  Participants are asked to send their self-defined uterus to the project organizers with a stamped self-addressed envelope for its return after the exhibition.

We only ask that you don’t take your uterus for granted. Claim it! Have fun with it but take your control of your own personal uterus very seriously. Take the time to think about what your uterus wants to say visually, and make it happen. You may use words, stitches, dye, colors, textures, images, sparkly stuff, fairy dust or whatever else inspired you. We want uteri both bold and shy, and will even have some made by guys.   (There are already rumors of uteri aprons, pillows, sculptures and clothes).

Once all the uteri have been received the artists will follow the tradition of the motherhood of church ladies and assemble their collection of unique, individual and righteously outspoken uteri for public viewing in the Steinhilber Art Gallery as a part of the exhibition entitled “Power, Politics, and Performance”

Our timeline is as follows:

We are having an amazing response that is showing us that we are not the only ones who feel that enough is enough.  Join us!

Alison and I are looking forward to including an amazing installation calling for protection of reproductive autonomy as a part of out wonderful exhibition (which you should come see.  I’ll write more about the exhibition as it nears.)

It turns out Alison and I are not the only artists who see the uterus as a symbol of independence.

The women behind Government Free VJJ have a different approach than we do, but its equally effective. They say:

“Whether you are a Democrat, a Republican, or an Independent, female or male, please join us in sending a strong message to our government representatives.

Tell your male government representatives:
“Hands off my uterus! Here’s one of your own!”

Please Note  This is NOT a group for political argument and debate. This group is not in support of any specific political party and it is not pro-life or pro-choice. This group is against government regulation of women’s bodies and it is against the government making personal and moral decisions for us. If you disagree with this project, please find a group more suited to your tastes. Anyone who starts arguments, is rude or mean, or spams this site with religious or political debates will be banned.

1. Knit or crochet a vagina or uterus. http://www.governmentfreevjj.com/the-patterns/
2. Print a message to enclose.
3. Mail it to your male Senator or Congressional Representative [links provided]
4. We’re in the process of arranging hand delivery to congressional offices in Washington, until then, go ahead and mail yours in!
5. Record your items in this spreadsheet so we can track which representatives still need to receive a “gift”!
6. Don’t forget to thank your representative if he respects women and supports our rights.”

There are other artists who have adopted the uterus as a subject and symbol, and not all of it is focused exclusively on reproductive choice.  Some, like The Uterus Flag Project are social practice art projects to increase the awareness of over medicalization of women. 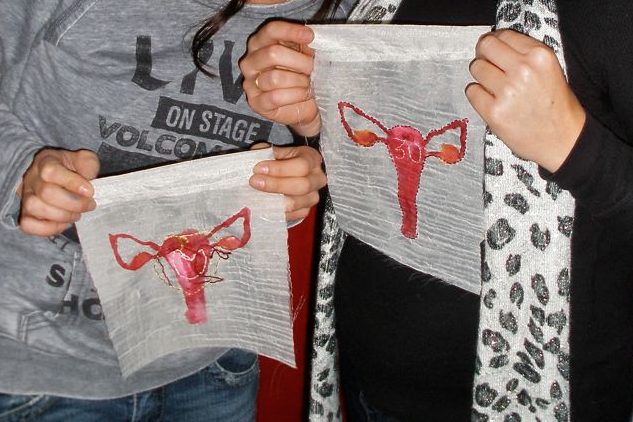 The Uterus Flag Project, a social practice art project to increase the awareness of over medicalization of women.

Escondido artist Terrilynn Quick is asking participants to be a part of The Uterus Flag Project.   She discovered this need while doing her MFA- Feminism,Fiber Arts and Craftivism and for her final grad show coming up in July 2012.  She is seeking contributions.  Her personal political concerns are about the over medicalization of women, and specifically having an unnecessary hysterectomy. On her blog she asks if you have a story, and to please share it and participate.  You can contact her and she will send you a packet.  Here is the Project Facebook page.

Uterus Flags have been touring in Europe for a while too.  Billed as  ‘public intervention’ they make the lack of awareness of women’s concerns more visible.

Artists Libia Castro and Ólafur Ólafsson  ( who have established their center of work in the cities of Rotterdam and Berlin.) have exhibited Uterus Flags in various European cities. The flags are essentially a bunting in 9 different color combinations, inspired by heraldry and party-flags, but they bear the silhouette of the female sexual organs; uterus, falopian tubes, ovaries and vagina.

Another interesting creative project is Incorporate My Uterus, a project of the Florida ACLU. They say:

Coast to coast, conservatives get elected by promising smaller government and less business regulation but as soon as they get elected, they rush to put big government regulations on the personal freedom and privacy of your body. It’s a clear double standard.  To them, there are too many regulations on pharmacies and fruit stands but not nearly enough government rules about your uterus.

It was inspired by the following quote by – Representative Scott Randolph of Florida.

The more I have looked the more I have found systematic outrage across the country at the efforts to regulate women’s reproductive lives by imposing particular moral and religious perspectives.  Organizations like the Women’s Media Center are working to make sure women’s perspectives are better represent in the media, and that sexism is called out when it occurs.  Many individuals, including artists, are fighting back in our own ways.

We invite you to join our project or create your own.  I know there are many more feminist creative projects out there focusing on reproductive justice and rights.  Please send us links to those projects in the comments, whether they are uterus-centered or not.