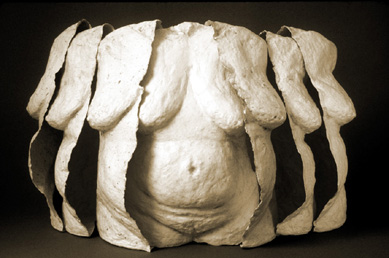 From January through May this year Staten Island artist and activist Susan Grabel had a retrospective of her work entitled “Constructions of Conscience” at the Staten Island Museum.  The exhibition spanned her 35 plus years of creating art with a social purpose, and brought together works representing feminist critiques of contemporary culture that have brought a larger meaning to her creative work throughout her career.

Susan Grabel explores the human dimension of social issues in sculptures of handmade cast paper, clay and mixed media and collagraph prints and collages.   For many years Susan was best known as a sculptor of small humanistic clay figures and vignettes.  Throughout her career Susan’s creative  work has always had an intimacy and empathetic feeling for the common person.

Her works for the last decade have focused on her ‘Venus’ images of cast paper.  In this series she examines the female image as it is, not idealized, not glamorized, but projected as a real and unvarnished display of female anatomy subject to the effects of aging, childbearing and gravity.   These pieces are sculpted in clay and then cast in paper. They vary in size from figurines about six inches in height, to full figured woman slightly over life sized.  In making the work she first forms the figures in clay and then casts it in paper, producing  somewhat fragile yet elegant torsos with the strength of lives fully lived. In these works there are no heads or extremities but there form speaks volumes.

Her work often demonstrates how the prevalent female ideal (underweight, young and artificially smooth) bears no resemblance to real women by contrasting this  idea of an ‘ideal’ with the bodies of large, round women whose age and experience shows on their bodies.  None-the-less her fuller figured and sometimes deeply scarred “Venus” series represent the beauty of life lived fully as a woman.

The oldest work, Caught in the American Dream, from 1978, critiques our overwhelming in consumer culture, and exemplifies Susan’s long term commitment to social commentary through her art.

Her works in the 1990s examined homelessness by representing individuals, sometimes children,  as beautifully modeled portraits  in dry, unglazed clay often presented in rough boxes, made of slats.

Susan  says of her creative and activist work:

I have been doing figurative sculpture and exhibiting for over 35 years and am currently engaged in exploring printmaking, particularly the collagraph. My work on the human dimensions of social and political issues like consumerism, homelessness, alienation and aging women’s’ bodies is in the humanistic tradition of Kathe Kollwitz. 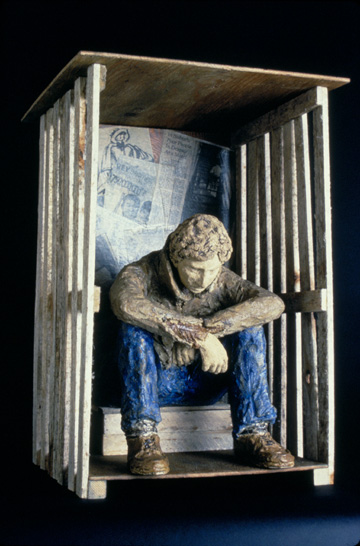 Once I Build a Railroad, ceramic, by Susan Grabel

In the 1970’s & 80’s I was involved in the figurative co-op gallery movement in Soho. I was married and raising two children at the time so being a member of Prince Street Gallery worked well for me. It was good to be part of a community, have a goal and know I had a place to show.

I have also had solo shows at the Elizabeth Foundation, Soho20 Gallery and exhibited nationally in group shows at galleries, universities and museums. My work has been included in such major surveys as In Three Dimensions: Women Sculptors of the ‘90’s, Newhouse Center for Contemporary Art, Staten Island, curated by Charlotte Streifer Rubinstein and Sculpture of the 70’s: the Figure , Pratt Manhattan Center. My work has been reviewed in the New York Times, Art News and the Staten Island Advance.

In the early 90’s, galvanized by The Clarence Thomas hearings and especially the Senate Judiciary Committee’s patronizing and sexist treatment of Anita Hill, empowering women became my mantra. Between 1992 and 1998, I worked with the Women’s Caucus for Art serving as President of the New York chapter, on the national board and later as national Treasurer. Together we created opportunities and stimulation for women to further their art and spirit.

Also in the 90’s, I became interested in public art as a means to affect people in their daily environment. I created two public works: The World’s Kitchen, a clay mural commissioned by the Staten Island Children’s Museum; and, Regarding Women, a sculpture for the Center for Women’s Health of Staten Island University Hospital .

I am a sculptor and printmaker and Feminism has informed all of my work although sometimes more explicitly than others. My early sculpture was in glazed clay – serious themes in a craft medium. There were genre tableaus dealing with personal family subject matter; a series called Caught in the American Dream depicting women strangled by commodities; a series on homelessness; and a series on Alienation – portrait reliefs in boxes with grates and bars in front. 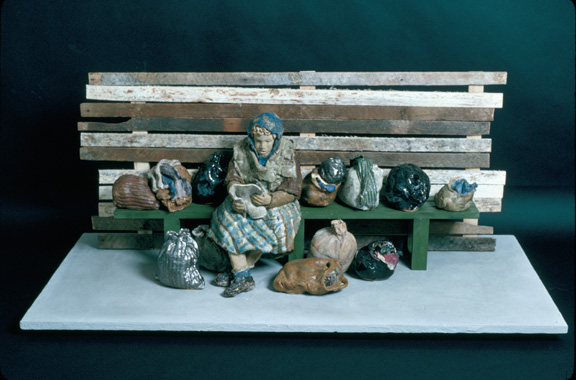 My work deals with the human dimensions of social issues. In the late 1990’s, I was particularly concerned about the lack of positive images of older women in our youth-oriented culture and how the media constantly bombards women of all ages with images of femaleness that bear no relation to what they see in the mirror. I began to explore the reality of the older woman’s body, bringing to the fore what we don’t want to see. The body is not idealized, but shown as it is, with all its wrinkles, lumps and bumps, imprinted with life’s experiences, its pains and joys. 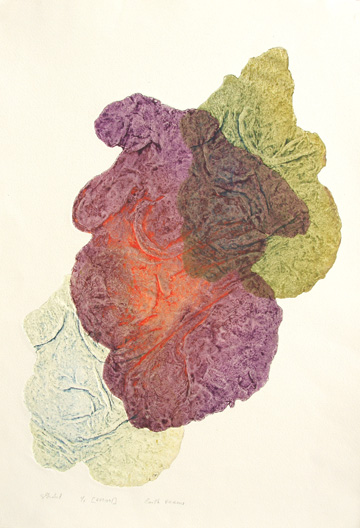 Through classical references and the use of handmade cast paper with its rich textures, colors and lightness, I show the beauty of the aging woman’s body as well as its sensuality and grace. I normalize it, confronting the conventional biases about aging women and validating women’s experiences of themselves. 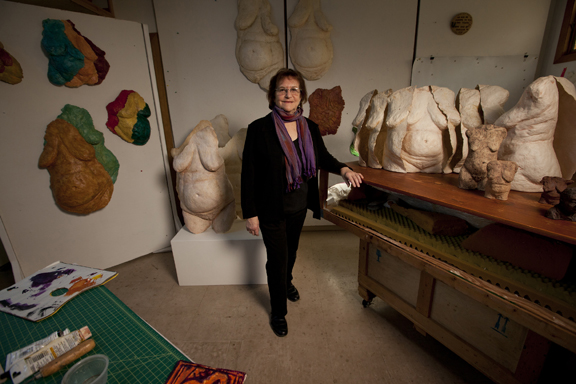 Susan Grabel in her studio, 2011 – photo by Willie Chu

Susan and I both have served on the national board of the Women’s Caucus for Art, in  the 1990s.  This was in addition to her leadership in the New York Women’s Caucus for Art chapter.  Susan Grabel has worked hard for social change and to further opportunities for women in the arts across the US.  All the while she has created, and continues to create, rich and moving visual experiences for her art audiences.

Thank you Susan for your years of activism, AND thank you even more for your rich and meaningful art.

Watch for Susan Grabel’s upcoming exhibition at Ceres Gallery next April 2013 if you are in New York.  You can also find Susan’s work in the Feminist Art Base of the Brooklyn Museum.

No comments yet. You should be kind and add one!