“My visual concerns run the gamut from careful study to poetic, symbolic and sometimes political representations of nature and human nature.” 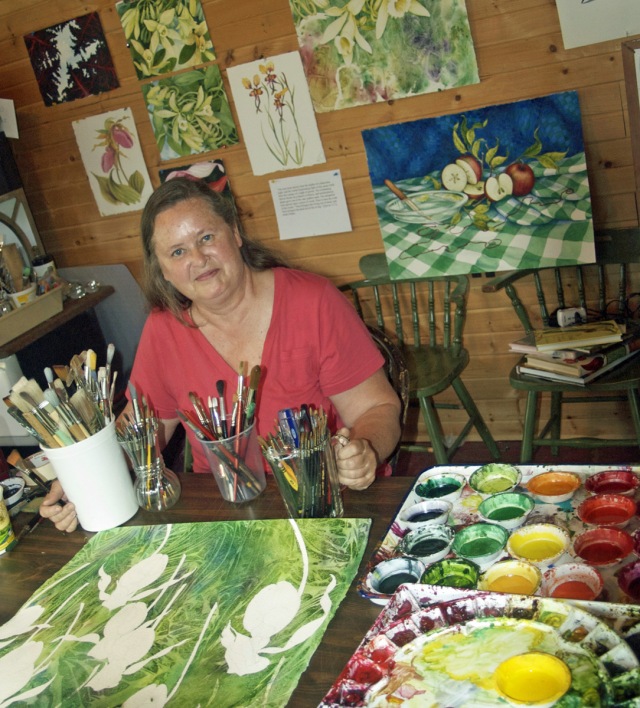 Photo of Helen Klebesadel in her studio by Lori Ushman

“I believe the act of making art can be an act of self-determination and empowerment. My paintings examine how in re-claiming, re-visioning, and re-membering ourselves as whole people, we bring our art, our action, and our voices to the world. We have to be able to imagine the world we want in order to achieve it. In our creative work, it is important that we notice and examine how awareness occurs on the path to finding a creative and critical voice. When we recognize that our place in the world is a part of larger social patterns, we can start to change those patterns to create the world we want to live in.” — Helen Klebesadel.

Helen Klebesadel is an artist, an educator, and an activist. Born and raised in rural Spring Green, Wisconsin, Helen maintains a studio in Madison, Wisconsin.  She is best known for her environmental and women centered watercolors.  She uses the creative process to think visually so she can use her creative process to help her understand the world.   She believes her artwork create narratives that re-examine and re-present existing power structures  so we can notice when they hurt humans and nature.

Helen’s watercolors push the traditional boundaries of the medium in scale, content, and technique. Ranging in size from the intimate to the monumental, her paintings are transparent watercolors on paper and canvas. She starts with detailed drawings and developing the images with layer upon layer of color washes and dry brush technique mixed with occasional areas of wet-into-wet spontaneity.

Klebesadel exhibits her work nationally and internationally, including having shown her watercolors in several American Embassies through the Arts in the Embassies Program. The Bergstrom-Mahler Museum presented her first solo museum exhibition in 1994.   The Copelouzos Family Art Museum in Athens, Greece acquired her work in 2020. Helen’s artwork is represented in the art collections of the American Council on Education, the Racine Art Museum, West Bend Mutual Insurance, Lawrence University, UW Hospitals and Clinics, Central Wisconsin Center,  the Dubuque Medical Clinic, the St. Francis Medical Center in Grand Island, Nebraska and numerous private collections. Several of her watercolors addressing environmental themes are also in the collections of the University of Wisconsin-Madison’s Nelson Institute for Environmental Studies. as well as the University’s Trout Lake Research Station.

Helen’s  public commissions include a twelve-foot watercolor for Ellen and Peter Johnson HospiceCare Residence, and a series of large watercolors for the new University Hospital in Madison, Wisconsin.

Helen Klebesadel earned her BS, a certificate in Women’s Studies, and a MFA in art from the University of Wisconsin-Madison.  She is also certified as a creativity coach through the national Creativity Coaching Association.  Helen has taught courses and workshops on creativity, studio art, and the contemporary women’s art movement for two decades. She taught studio art and chaired the art department at Lawrence University from 1990-2000, before leaving to accepting the position of  Director of the University of Wisconsin System’s Women’s and Gender Studies Consortium in 2000.  In January 2013  the Women’s and Gender Studies Consortium’s administrative home shifted to the UW-Madison Department of Gender and Women’s Studies.  From 2013-2016 Helen was also the Director of the UW-Madison Division of Continuing Studies’  Wisconsin Regional Art Program .  That program was started by artist John Steuart Curry in the 1940s, and has offered exhibition and creative opportunities for Wisconsin artists for 80 years. Helen retired from UW-Madison in the fall of 2018.  She continues to focus on her studio art work, as well as offer private art and creativity classes, art workshops, and consultations in person and online through her website Creativity Lessons.

Helen believes good collaboration can be a model for world survival. It is both the hardest and most rewarding creative work she has done.  She is co-facilitator of the Exquisite Uterus Project with artist Alison Gates,  The project, focused on reproductive justice, has over 200 participants from thirty states and four countries.  Since 2014 she continues to exhibit and expand another collaborative project created with artist Mary Kay Neumann called The Flowers Are Burning: An Art and Climate Justice Project   This project uses their art and website to address current climate change issues. During the 2020 Covid-19 pandemic they launched a virtual exhibition of their current focus entitled, ‘Oceans A Rising‘, drawing parallels between the viral threats to humans and to ocean coral and sea star health,

A dedicated educator and mentor, Helen contributed a chapter entitled Re-Framing Studio Art Critique and Practice, to the book New Museum Theory and Practice: An Introduction, and she co-authored with Lisa Kornetsky the chapter, Critique as signature pedagogy in the arts, in Exploring Signature Pedagogies: Approaches to Teaching Disciplinary Habits.

Helen Klebesadel’s watercolors and prose have been published in Frontiers, Feminist Studies, Interweave, CALYX  and Femspec.   Her artwork was included in 100 Artists of the Midwest: Illinois, Indiana, Michigan, Minnesota, Ohio, and Wisconsin, published in June 2012 by E.Ashley Rooney, and her art and activism is included in the  book, Vision, Passion & Purpose: ARTISTS As World Changers,  by Renee Phillips.

Helen Klebesadel is a past national president (1994-96) of the national Women’s Caucus for Art and served as a member of  the  Wisconsin Arts Board ( 2006-2013), and on the Madison City Arts Commission (2003-2006).  Helen has also served in leadership roles on the boards of the Grassroots Leadership College, and the National Women’s Studies Association.

Check out how the Artsy Shark blog which featured Helen’s work.