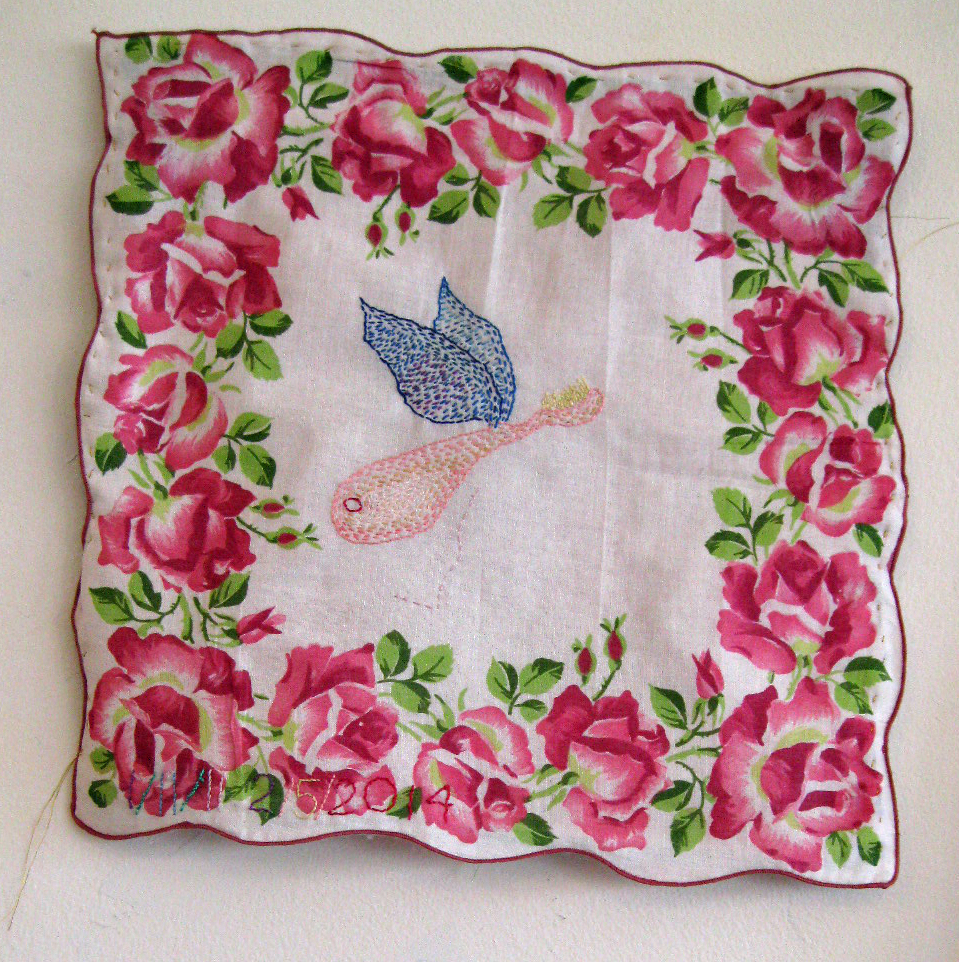 Memory Cloth –TATTOO, by Leslee Nelson
As soon as Kaylee turned 18 she started getting tattoos. I was not delighted by it, until she got the Flying Toothbrush. It was to represent me. She used to dress up in a skirt I’d made with fabric I had silkscreened. The flying toothbrush represented my Grandfather. He sang the song My Bonnie Lies Over the Ocean. When I was a kid I didn’t know what a bonnie was so I made it look like a toothbrush flying over the sea.
Started 1/11/11 ~ Made 2/5/2014

An exhibition The Memory Cloth Collective: Stitches in Time – “Meant to Be” is currently on display at the Lakeside Coffee House at 402 W Lakeside Street in Madison, WI until May 11, 2014.  This is a wonderful exhibition of non-traditional fiber works that have grown out of  weekly sewing sessions  session focused on Making Memory Cloths was initiated and facilitated by artist Leslee Nelson.  It was initially as a part of the Cafe’ Allonge, performance art in coffee shops for the Wisconsin Triennial exhibit at the Madison Museum of Contemporary Art.

I have written about Leslee Nelson’s Memory Clothes and what inspired them here. 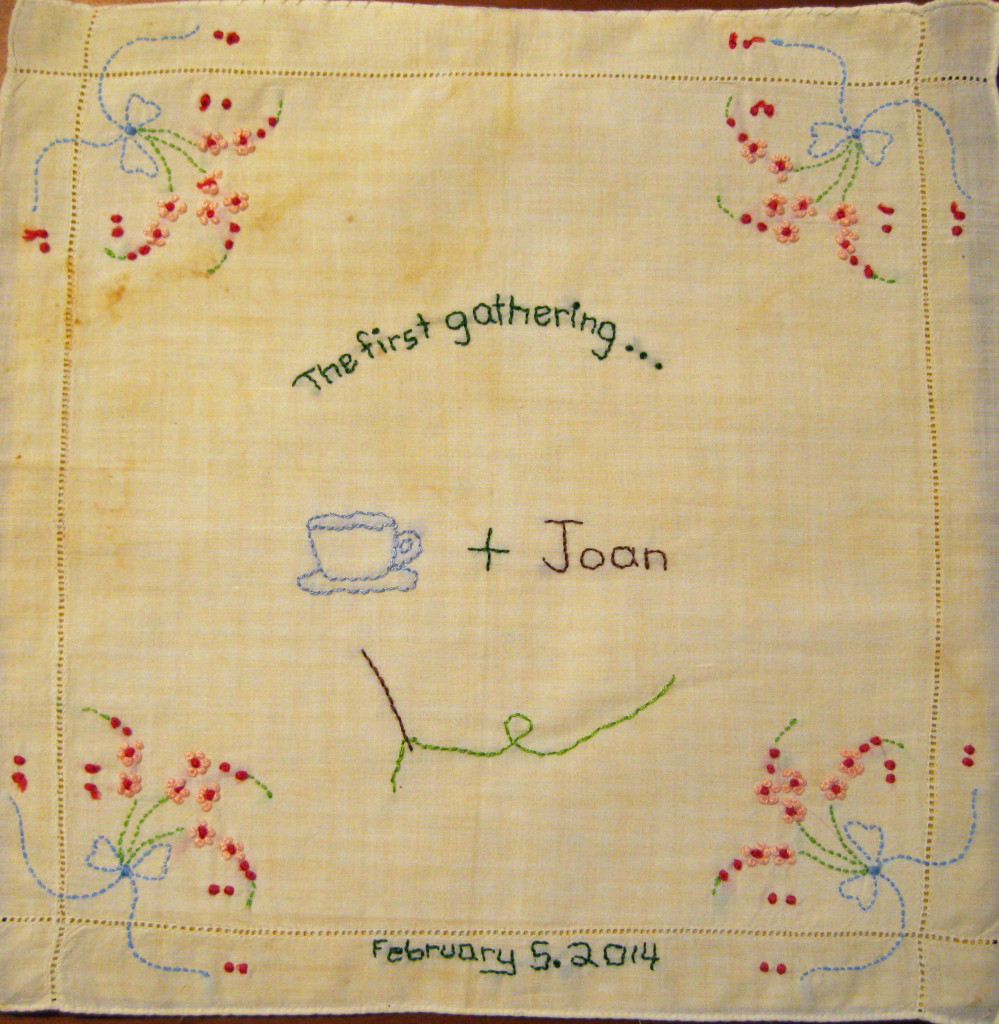 FIRST GATHERING, by Ann Engelman
Three years ago my friend Joan and I met at the Chazen Art Museum and saw Memory Cloths by Professor Leslee Nelson. We were stunned by the elegant simplicity of embroidery on vintage materials including hankies, dish towels napkins and a table cloth. One year later, for my birthday, Joan presented me with an e.e. cummings poem embroidered on a hankie that belonged to her grandmother.
Treasure!
One year after that I saw an invitation to join a gathering to create Memory Cloths with Leslee. I would now have a use for my vintage hankie collection! Joan and I immediately joined and could not believe our good fortune! We see more of one another as we come early, have lunch and save the table for our gathering.

Last fall 50 people joined Leslee Nelson in making their own memory clothes.  They loved doing it and didn’t want to stop, so Leslee kept right on coordinating the Wednesday afternoon meetings at the cafe.  May people kept coming and this exhibition shares some of the pieces that were created. 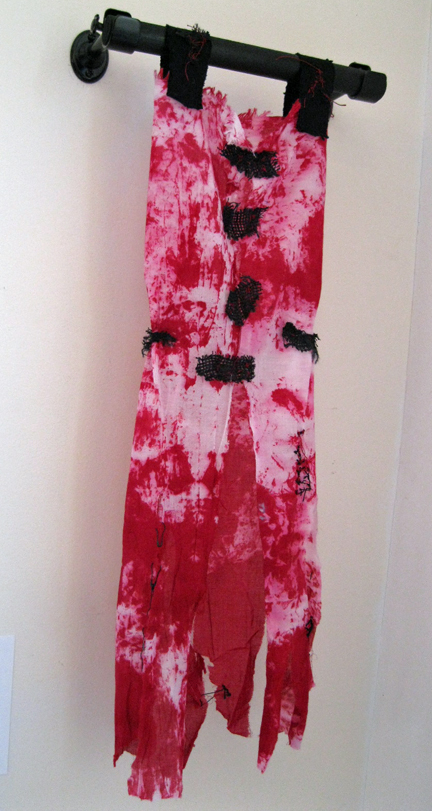 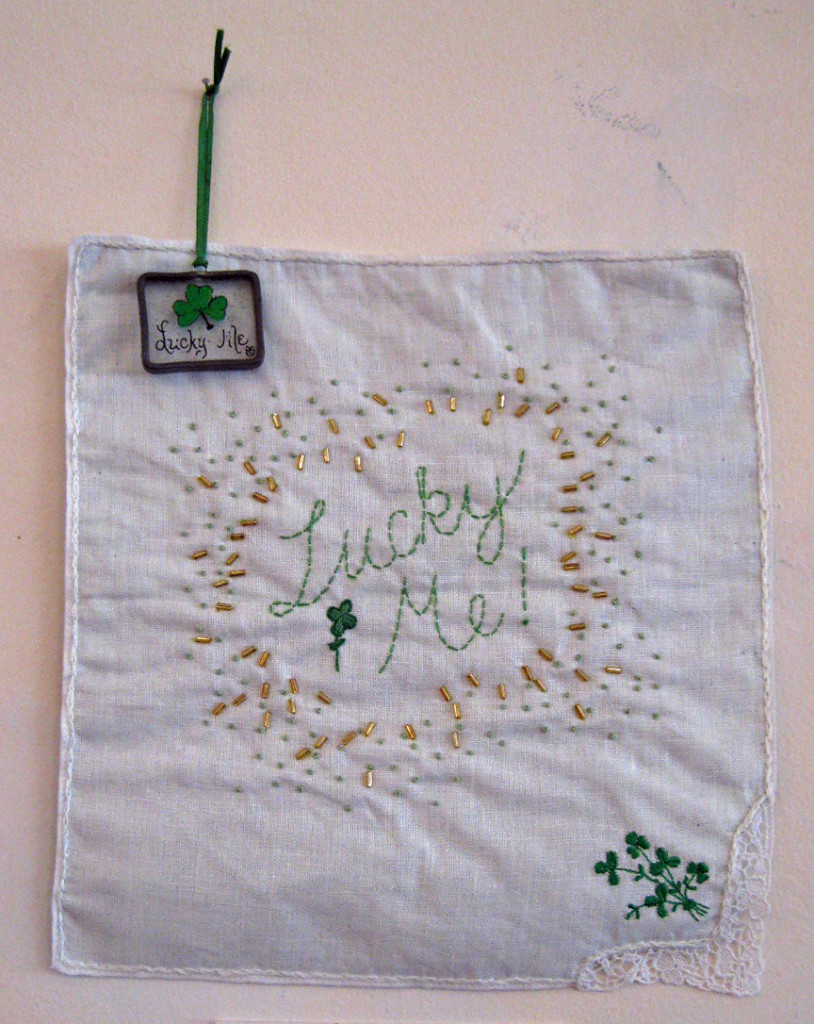 LUCKY ME!, by Cynthia Quinn
I was attracted to this Irish linen handkerchief because of the shamrocks. As I looked at it, what popped into my head was Lucky Me! This phrase comes from a small glass ornament my mother had with a shamrock on it that I’ve kept for years. My mother suffered from the effects of brain cancer when I was raising my daughters. I worked as a graphic designer and tried to help my Dad. I used to think Why Me! as the years went by and she deteriorated. As I stitch Lucky Me on the linen, I’m thinking a lot about my mother, the time she lost to enjoy life, family and her interests. With that in mind I am grateful to be the age
I am, seeing each small event in life as special.
I miss you mom & Lucky Me! 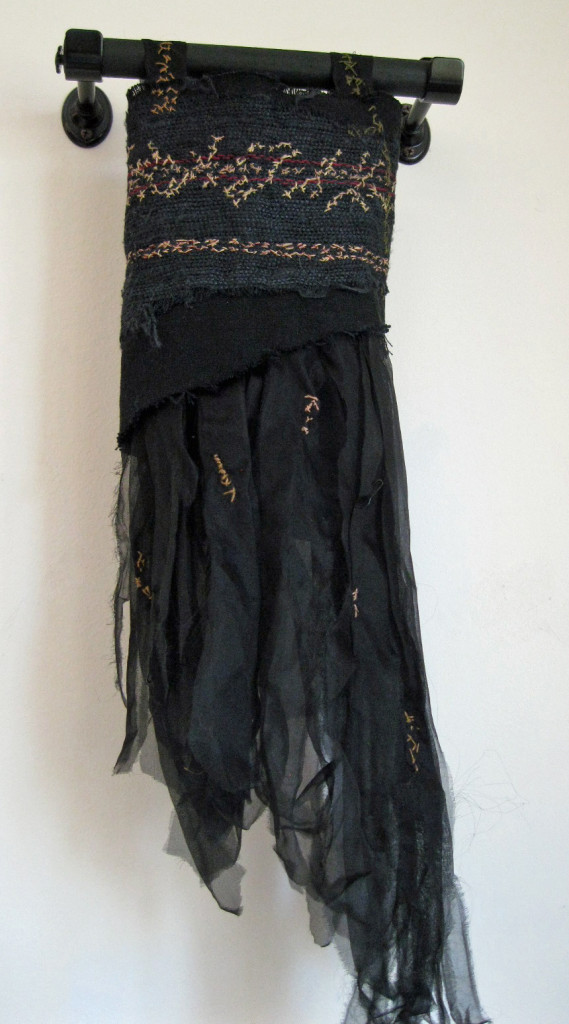 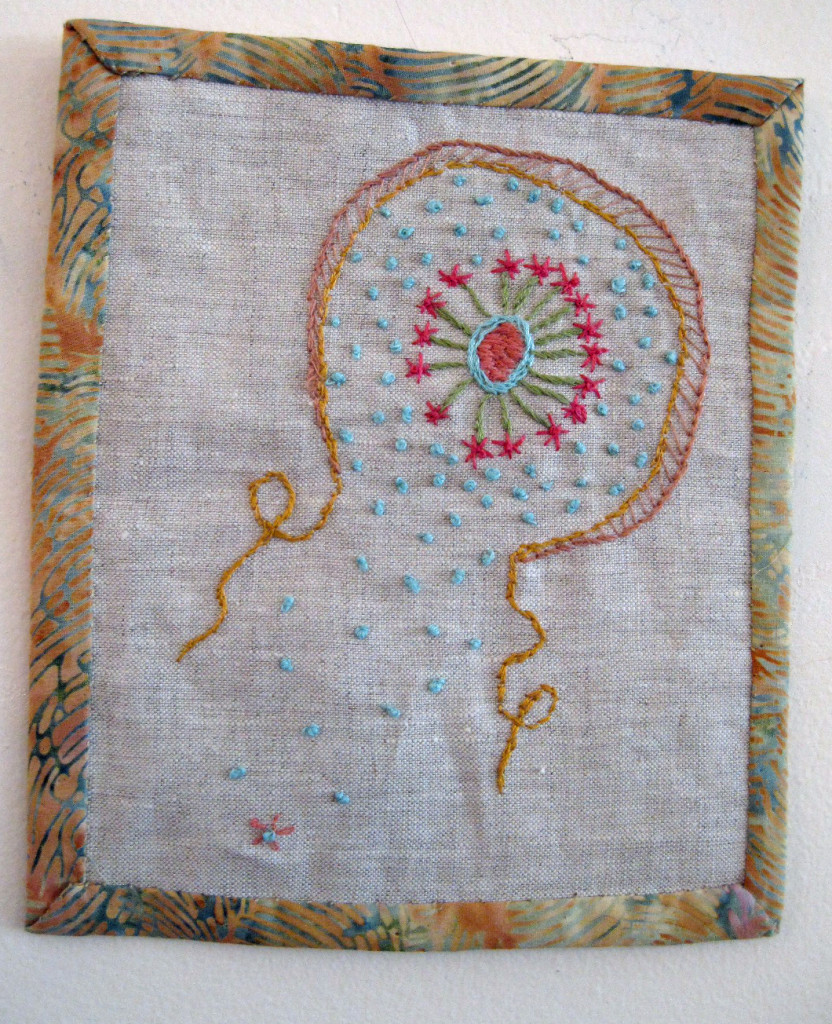 NUMBER ONE by Marilyn Wedberg
This is my first cloth. When I sat down to stitch with Leslee, I had trouble choosing a memory, so I decided to just start stitching and see what happened. First a blue circle appeared, then it was filled with pink stitches, and then green lines began to radiate out . I call this intuitive stitching — no rules and no plan. What a relief!

WISH YOU WERE HERE
Mixed Media, bu Maureen Griffin
Dear Dad,
Going to visit Devil’s Lake soon with Dave.
So many wonderful memories!
The best two weeks of the year.
Sure do miss you.
Love,
Maureen 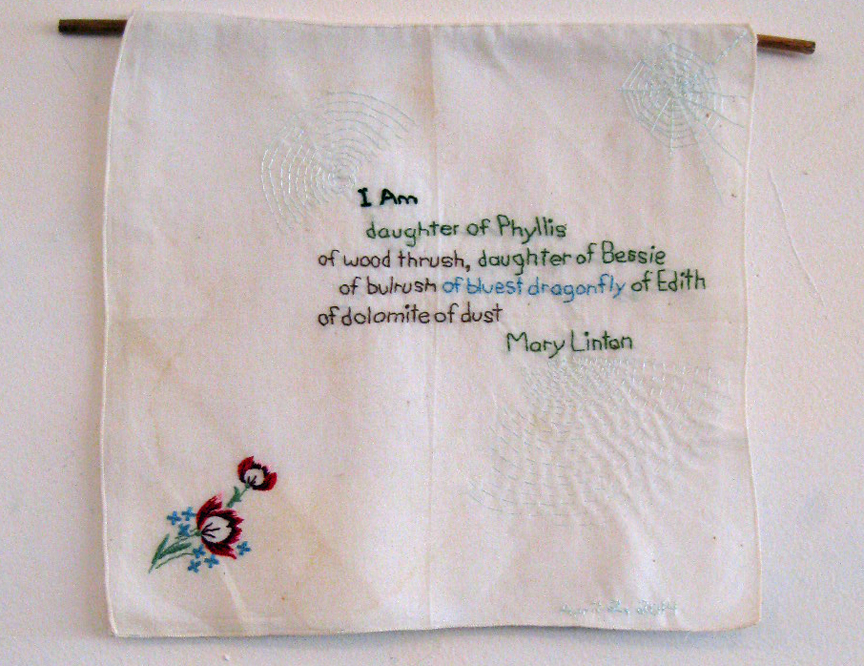 POETIC LINEAGE, by Ann Engelman
My poet friend Mary Linton signed off her emails with this list of her grandmothers and natural characteristics. It got me to thinking about my own lineage and what images I might apply. Future Memory Cloths I thought! So as I stitched this I thought of my Grandma Memories. Mary is a remarkable poet. I honor her often for helping me to see my world and my place in it. 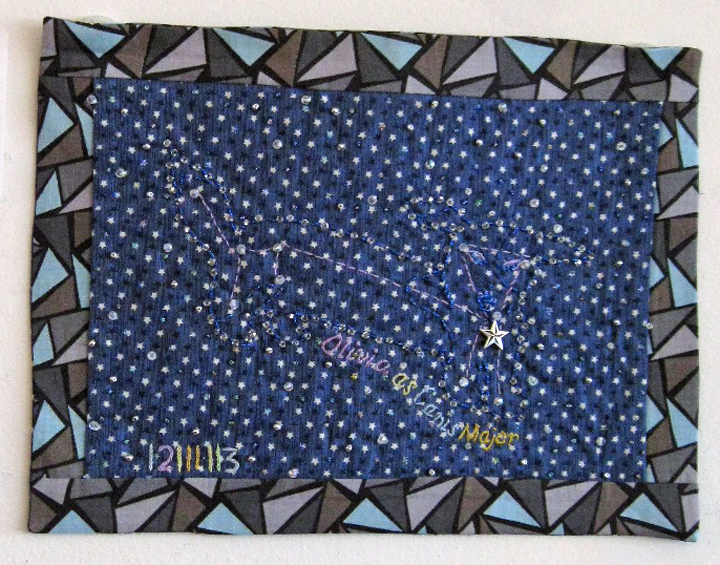 OLIVIA AS CANIS MAJOR, by Cynthia Quinn
In December we moved from our wonderful Baltzell Street house of 27 years to a new place, plus in August, we bought a playful Cardigan Welsh Corgi puppy named Olivia. Months were spent packing and moving, during one of the coldest winters on record. Poor Olivia endured days of boredom. The constellation Canis Major includes Sirius, the dog star, which is the brightest in the winter sky. Legend tells that Canis Major loyally follows its mythical master Orion across the sky. I’ve stitched Olivia into that sky, patiently waiting for us and spring.
This is part of a Robert Frost poem I tweaked-
Olivia, that heavenly beast,
with a star in one eye,
gives a leap in the east.
She dances upright,
all the way to the west,
and never once drops,
on her forefeet to rest. 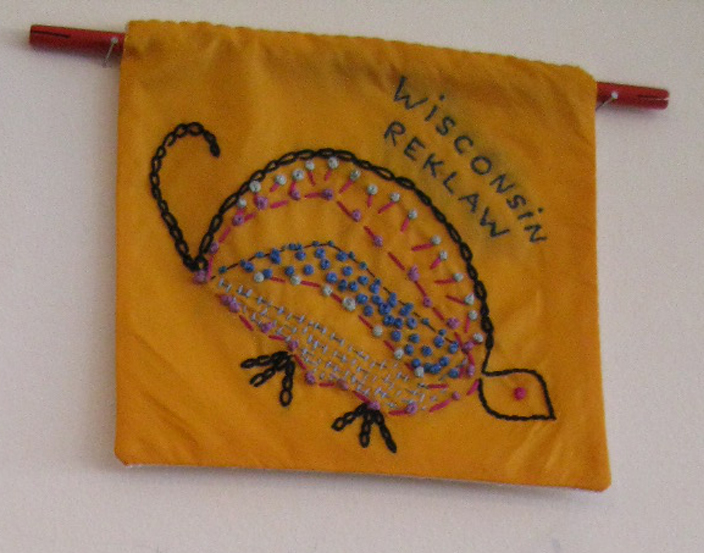 WISCONSIN REKLAW, by Marge Engelman
The theme of the Memory Cloth session with Leslee Nelson was Politics. I had no idea how I would do a stitchery related to that but, I began stitching randomly using stitches I learned long ago. I took the piece home, added more stitches to make the image of a small headed animal. Then it came to me that it would be a Wisconsin Reklaw – – – Walker spelled backwards. 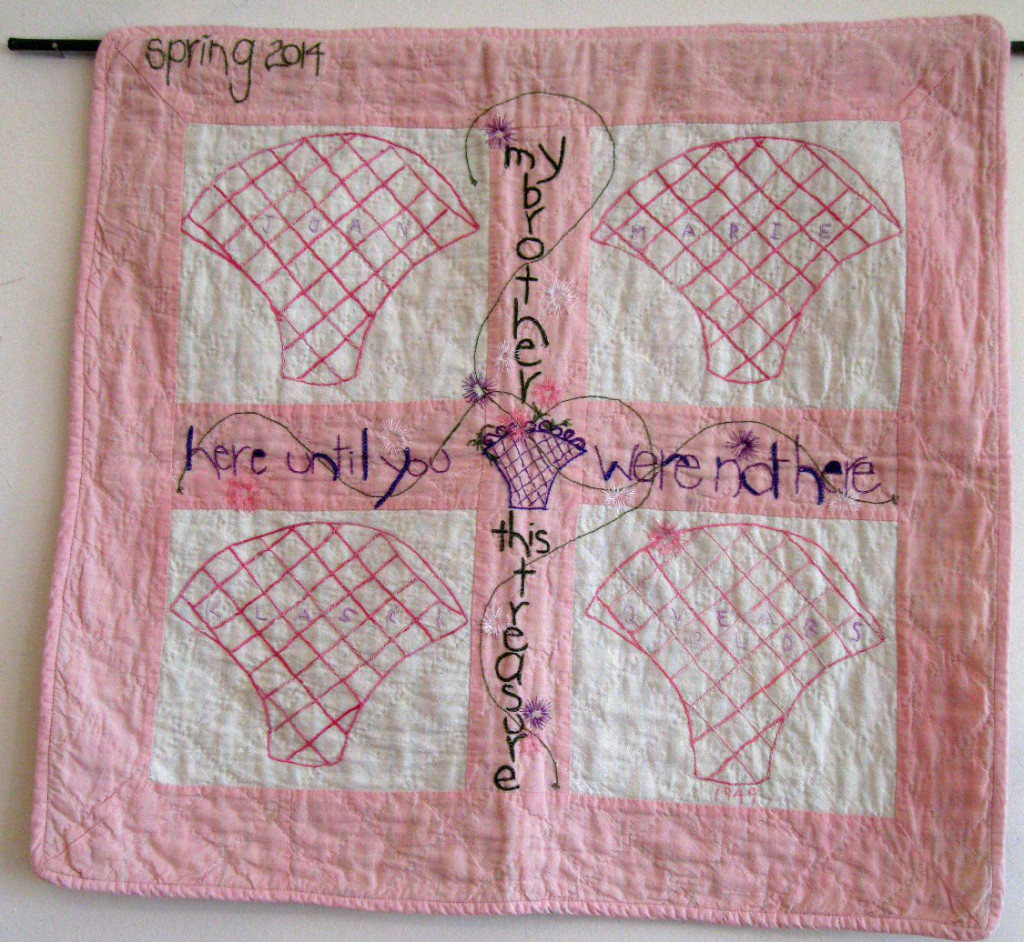 MY BROTHER THIS TREASURE, Joan Marie Klaski, 66 Years Old
My brother, Donald, embroidered the four panels on this little quilt, made for my dolls. It was 1949. He was twelve years old and I was two. Don was my only brother, my only sibling. He passed away three years ago. This piece was the obvious choice for my first “memory cloth.” My own embroidery and words are an affectionate tribute to his.
Spring 2014 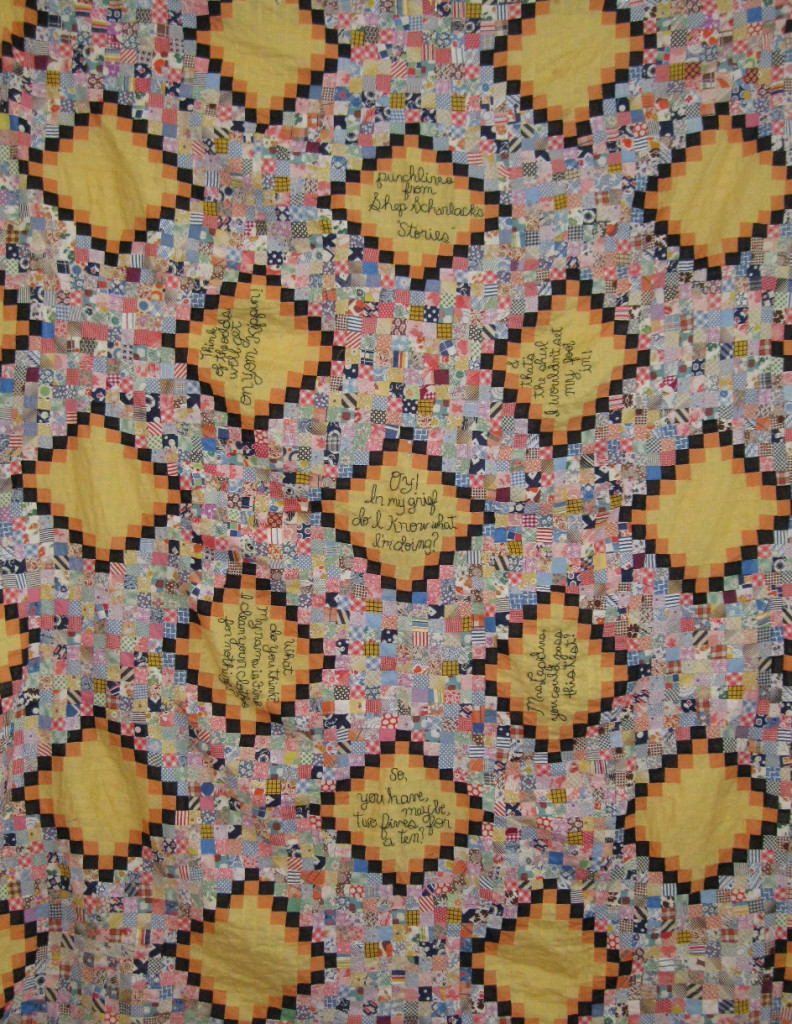 PUNCHLINES FROM SHEP SCHARLACK’S “STORIES” , by Bobbie Malone
in process: antique machine-stitched quilt top with hand embroidery
Sheppard Scharlack was my father, who died very suddenly at age 58. He had a wonderful sense of humor, and the entire family still talks in the punchlines from his unending array of borscht belt stories told Texas-style. 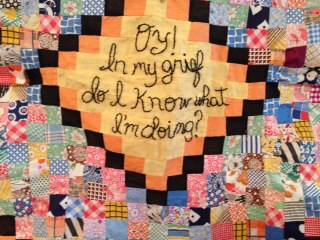 Detail of PUNCHLINES FROM SHEP SCHARLACK’S “STORIES” by Bobbie Malone 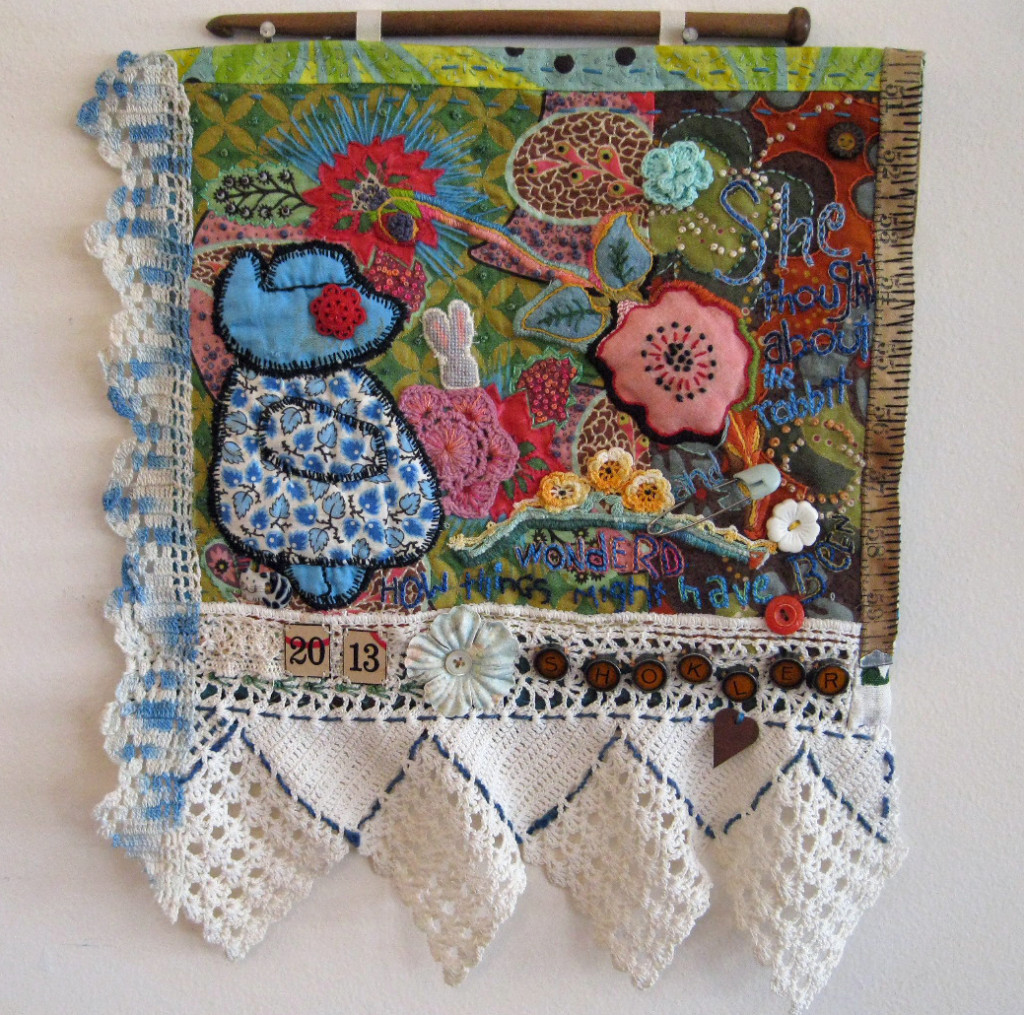 CHOICES # 1, by Sherri L. Shokler
Materials: Scraps of vintage family quilts, pillowcases, and sewing supplies from my great-grandmothers, embroidery from a childhood blouse, contemporary quilt fabric, scrapbook supplies and game pieces.
This piece is a meditation on a lifetime of reproductive choices. As a young woman I lived in a time and place where a full array of reproductive health options was available to me. As a middle-aged newlywed advanced technology was an option to enhance my childbearing possibilities. From the other side of menopause I find myself reflecting again on the paths I have chosen –
and not chosen – for my life 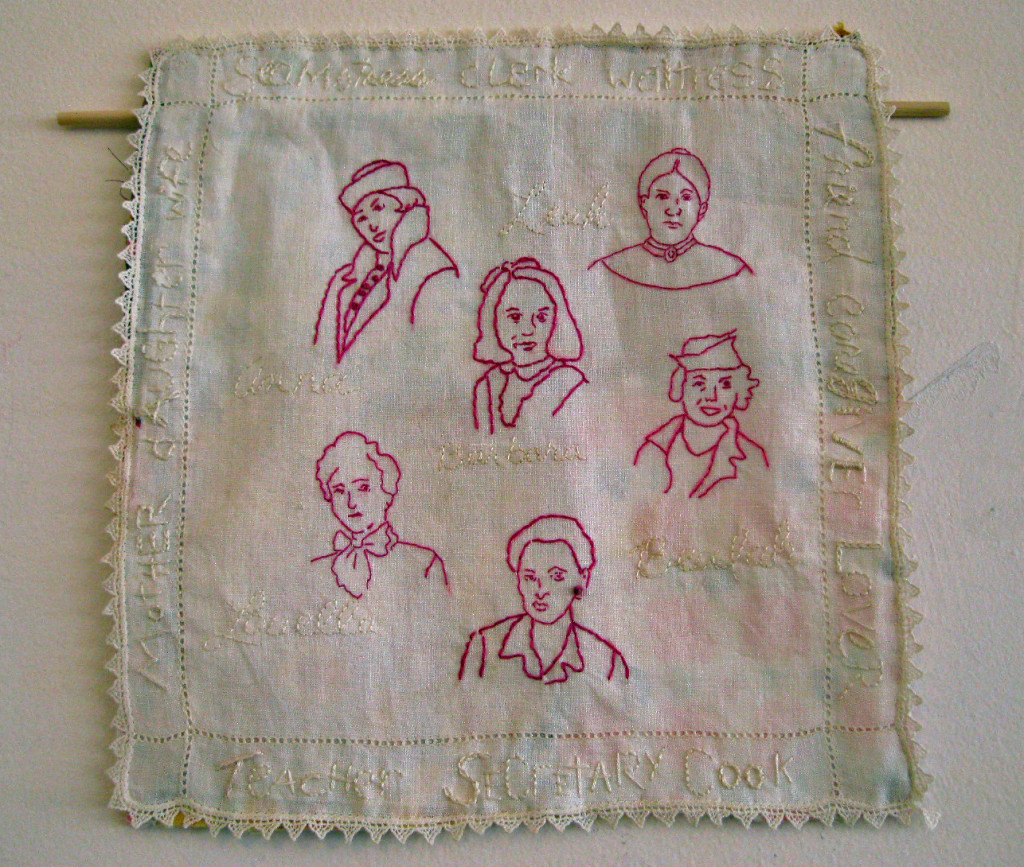 CHOICES # 2, by Sherri L. Shokler
Materials: Vintage hankie from Anna Jones Quinn Dusenbury Mendenhall (my great grandmother), pieced backing from a thrift store throw, and transfers of family photos.
This piece shows four generations of the women in my family beginning with my mother in the center; her mother Beulah; her grandmothers Louella and Anna; and her great-grandmother Leah. As a child I knew all of them but now, that they have all passed, I am seeing their lives, their stories, and my own, in new ways. Some left abusive relationships, some did not. In some way, all of their choices have become part of my story. 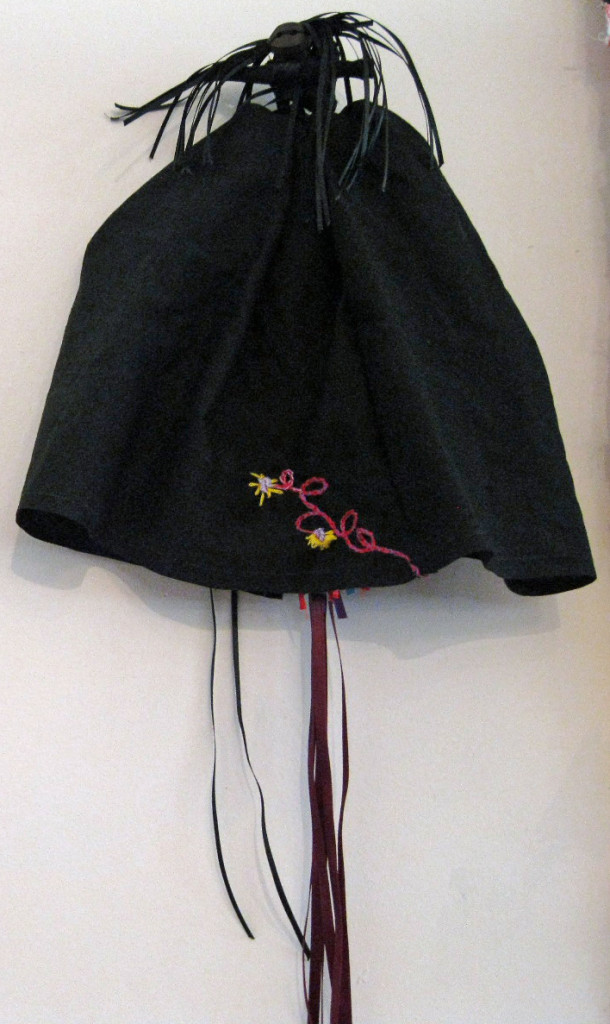 DEMETER, by yours truly Helen Klebesadel
I created this little spirit doll in a sewing session with several of my artist friends, that like me, usually work in other materials. I created it not long after we has suffered a death in my family. The figure symbolized, not death but a dark living spirit in a time of mourning, with its dark red ribbons mixed in with the black. I brought my figure to Leslee’s gathering and found my self beginning to embroider spring flowers twining up the edge of the skirt. She had found her name. Demeter. The mother goddess who mourns throughout the winter while her daughter, Persephone, was lost to here in Hades. While Demeter mourns the world is dark and cold, with her daughter’s return come the greens and flowers of spring

These are just some of the Memory Clothes inspired by Leslee Nelson’s creative journey into Memory Clothes.  We thank her willingness to share her inspiration with other creatives.

Check out the whole exhibition at the Lakeside Coffee House until May 11, 2014!